Charges Against Justin Brake Are A Serious Threat to Press Freedom 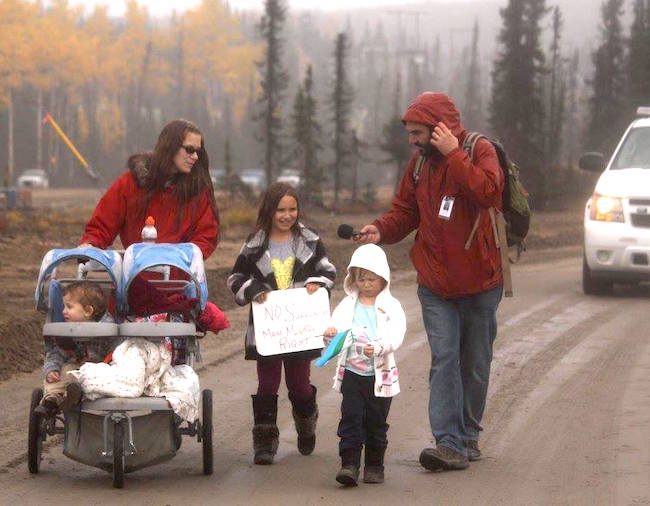 Justin Brake reporting from Muskrat Falls in Labrador in the fall of 2016. PHOTO: Janet Cooper.

We, the undersigned, condemn in the strongest possible terms the criminal charges brought against Justin Brake, reporter and editor for The Independent, for his reporting on the Indigenous occupation of the Muskrat Falls site in October 2016. The charges are an outrageous assault by the RCMP on press freedom in Canada and must be withdrawn immediately.

According to the court docket, Brake is being charged with “mischief relating to a testamentary instrument or property greater than 5,000” and “unlawfully disobeying an order of the Court.” He has been summoned to appear in provincial court in Happy Valley-Goose Bay on April 11 to answer the charges.

Journalism is not a crime
Sign the petition to drop the charges!

The occupation of the Muskrat Falls site began on October 21, 2016, following weeks of demonstrations and a blockade by Indigenous activists. The protests were sparked by plans to flood a wide swath of land as part of the Muskrat Falls hydroelectric construction project. A study found that Labrador Inuit would be exposed to harmful levels of methylmercury if the Muskrat Falls reservoir was not fully cleared of vegetation before it is flooded. Brake followed activists as they cut the lock guarding the camp gate and entered the site, and remained as the only journalist to cover the story from inside the camp.

Brake left the site after being named in an October 24, 2016, court order, issued by the Supreme Court of Newfoundland and Labrador, that compelled authorities to arrest him if he remained. The order came at the request of Nalcor, the Crown corporation developing the Muskrat Falls site. Nalcor failed to identify Brake as a journalist in its affidavit seeking the injunction.

"This is a serious threat to press freedom," says CJFE executive director Tom Henheffer. "This is a well-known tactic to prevent coverage by denying access to journalists. The RCMP has a long history of brutality towards indigenous protesters, which is one reason it is critically important to have a journalist there as an observer."

The charges against Brake come amidst a series of major press freedom violations in Canada, and are part of a disturbing pattern of legal intimidation against journalists and media workers by police and security forces. Canada ranks 18th out of 180 countries in Reporters Without Borders' (RSF) 2016 World Press Freedom Index, down ten spots from 2015.

Brake’s reporting provided the public with exclusive coverage on a matter of clear public interest, and was cited in his nomination by the Newfoundland and Labrador Human Rights Commission for the 2016 Human Rights Awards. Brake now faces a penalty of up to 10 years in prison for this very same work.

The RCMP’s decision to charge Brake is an unacceptable assault on the public’s right to know, and could cause a chill in reporting on controversies over resource development projects and Indigenous-led protests. It is essential that journalists be able to safely and freely cover events in the public interest, such as the occupation of Muskrat Falls, without fear of legal reprisals. We urge the RCMP to immediately withdraw all charges against Brake.