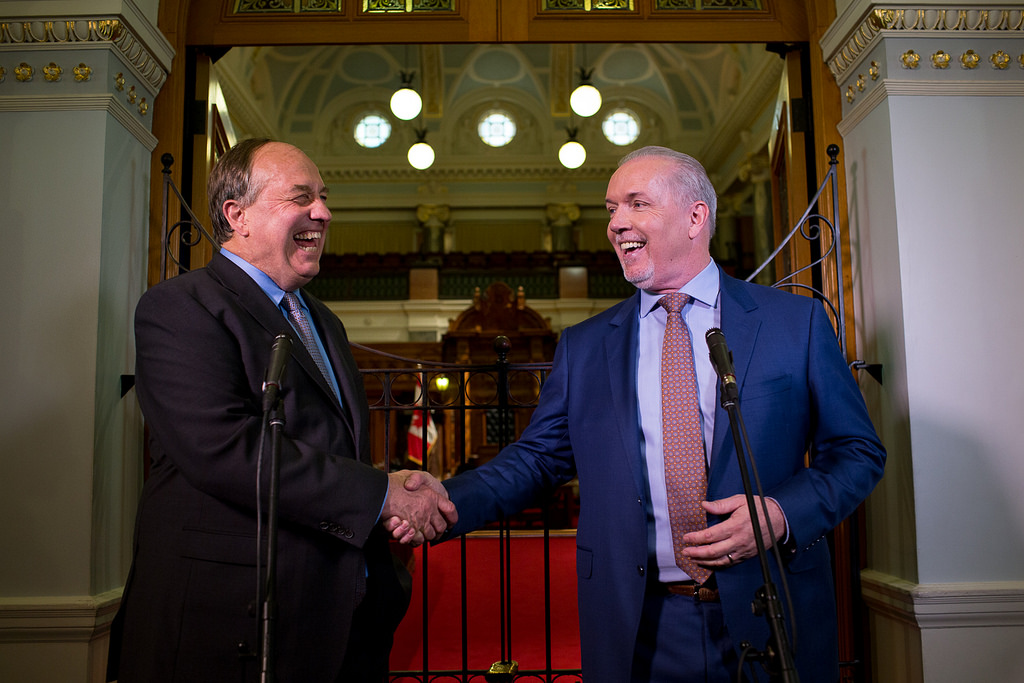 As B.C.’s Green and New Democrat politicians prepare to vote down the Liberal government after the May provincial election, we might soon have an opportunity to bring back legal protection for British Columbians targeted with anti-free expression litigation.

Twenty-eight U.S. states, along with the District of Columbia and the territory of Guam, have laws against Strategic Lawsuits Against Public Participation (SLAPPs). In Canada, only Ontario and Quebec have anti-SLAPP laws. SLAPP suits are court actions, usually brought by corporations and others with deep pockets, designed to hamper or deter defendants from campaigning on vital issues in the public interest by draining their resources through meritless legal claims.

SLAPP suits and threats of legal action do more than stifle the expression of those on the receiving end of a demand letter or statement to claim. They intimidate many other people who might have written a newspaper article or internet post, spoken at a public meeting, written a letter, posted a sign on their property, taken part in a demonstration or joined the executive of an environmental group.

British Columbia used to have an anti-SLAPP law. The Protection of Public Participation Act went into force on April 11, 2001, and was Canada’s first anti-SLAPP-suit law. The stated purpose of the law was to “encourage public participation, and dissuade persons from bringing or maintaining proceedings or claims for an improper purpose.” People hit with SLAPPs could ask a court to quickly and inexpensively toss out the lawsuit and award costs and damages to the person who was sued.

It also introduced the foundation for a new defence of qualified privilege for expression in the course of public participation, a defence the Supreme Court of Canada recognized in Grant v Torstar 2009 SCC 61, [2009] 3. This defence can be used when the public participation is deemed to be of interest to all persons who directly or indirectly receive the communication or witness the conduct.

The British Columbia legislation allowed defendants to bring an application, not less than 120 days before the trial date, to dismiss the lawsuit and recover their costs on a full indemnity basis. That means the people launching the SLAPP suit had to pay the full lawyers’ bill of their victims, something that is very rare in Canadian law.

In a province where there is a long tradition of opposition to clear-cutting forestry practices, pollution from mines, the construction of pipelines and the licensing of coastal marine tanker traffic, the Act came as a godsend to environmentalists and anathema to the resource companies that dominate the economy and contribute heavily to the right-of-centre provincial Liberal party.

Lawyers had previously tried to work SLAPP arguments into existing law, with some success. In Fraser v. Saanich [1999] B.C.J. No. 3100 (B.C. S.C.) (QL), special costs were awarded to the defendants because the purpose of the civil action was to stop public opposition to the plaintiff’s rezoning application. A developer, Fraser, sued several environmentalists and a municipality for negligence, breach of fiduciary duty, interference with contractual relations, conspiracy of tort, collusion and bad faith during a zoning dispute. The court expressly recognized this case as a SLAPP suit, struck the lawsuit, but could only award a portion of the real legal costs to the environmentalists.

The B.C. Liberals repealed the anti-SLAPP law soon after they were elected in 2001.

Some judges have been able to use wide interpretation of rules of procedure to work around the loss of the law and to try to protect expression rights, but the common law of defamation acts against the practice.

Defamation is a reverse-onus tort. Once an allegation of defamation is made by the plaintiff, the onus immediately shifts to the defendant to produce a defence. The plaintiff, at least in the early stages of the process, need only make out a claim that is not, on its face, patently absurd. Then the slow, expensive process starts to grind.

The British Columbia Court of Appeal will decide within a few months in Taseka Mines v Western Canadian Wilderness Committee, a defamation suit that the defendants claim is a SLAPP action meant to stop their campaign against a proposed mine. Opponents say the copper-gold mine near Williams Lake will spill toxic tailings into nearby waterways. The mine has been approved twice by the British Columbia government but was blocked by the federal government. The mining company wants actual and punitive damages from the environmentalists.

In 2016, British Columbia Superior Court Justice Gordon Funt threw out the litigation as a SLAPP suit, saying the lawsuit was launched “to silence critics on a matter of public importance. In this case, [the company’s] seeking punitive damages was an economic threat. In the context of a defamation action, seeking punitive damages may serve to silence critics. Further, Taseko was signifying that the defendants were walking the border of criminal law.”

The mining company appealed the decision to the Court of Appeal.

Meanwhile, the Ontario Court of Appeal has set aside three days at the end of June to hear arguments in several cases that will test that province’s new SLAPP law. Most of the cases involve litigation filed against environmental and public advocacy groups.

The Ontario law allows judges to quickly dispose of SLAPP suits if they infringe on free expression rights while causing little real damage to the target of the expression, and are motivated by a desire by the person launching the lawsuit to silence critics.

At the same time, a Toronto motions judge has reserved the decision on an anti-SLAPP motion filed by an Ottawa blogger, Robert Day, against controversialist Ezra Levant, who sued Day for online postings criticizing Levant’s fundraising for Fort McMurray fire victims.