Timeline: Major events in the case of Al Jazeera journalists in Egypt 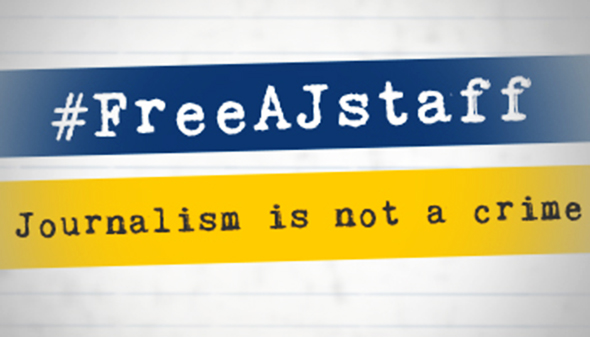 On September 23, 2015, Egypt’s president, Abdel Fatah al-Sisi, has pardoned Mohamed Fahmy and Baher Mohamed who were working for al-Jazeera English and were convicted of airing “false news” and biased coverage.

Mohamed Fahmy, a Canadian national, and his Egyptian colleague Baher Mohamed were released from prison after being pardoned along with about 100 other people.

The three reporters were first arrested on December 29, 2013, and subsequently charged with assisting the Muslim Brotherhood, spreading false news that endangers national security and operating without a license. On June 23, 2014, they were convicted of all charges against them and sentenced to 7-10 years in prison. Fahmy, Greste and Mohamed all announced their intention to appeal shortly after the verdict came down and were granted a retrial on January 6, 2015. However, before it could begin, Peter Greste was abruptly released and deported from the country on February 2.

CJFE has been advocating for the unconditional release and exoneration of the journalists since their arrest, as well as urging the Egyptian government to release the dozens of other reporters who continue to languish in the country’s prisons.

Below you will find  For more information on the persecution of Mohamed Fahmy, Peter Greste and Baher Mohamed, as well as other prisoners of conscience in Egypt, please visit cjfe.org/freeajstaff.