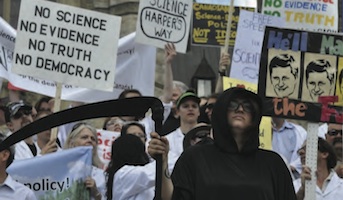 Government scientists being muzzled and prevented from speaking about their work has been a growing threat to the right to speak in Canada over the past few years. Although the Death of Evidence demonstration on Parliament Hill in July 2012 helped bring the issue into the public spotlight, and media coverage of the issue has been growing, increased protections for the right to speak among government scientists have yet to be granted.

Check out our timeline below for a look at how the scientific community has progressed in its fight to be heard and what obstacles remain. This article originally appeared in our 2012-2013 Review of Free Expression in Canada. You can download the article in PDF, or read the article online below.