Timeline: The search for justice for Anna Politkovskaya’s murder 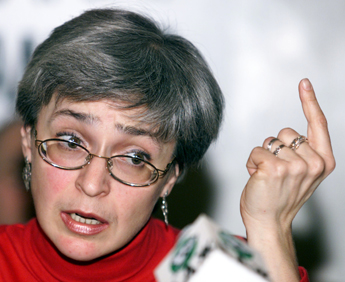 On May 20, five men were convicted in the case of Russian journalist Anna Politkovskaya’s murder. Rustam Makhmudov was found guilty of shooting Politkovskaya, while Ibragim and Dzhabrail Makhmudov, Lom-Ali Gaitukayev, and Sergei Khadzhikurbanov were convicted for organizing the killing.

Politkovskaya, a well-known Russian journalist, was killed on October 7, 2006. Her death has been linked to her critical coverage of the Chechen conflict and vocal criticism of the Russian government. As an internationally respected journalist, Politkovskaya’s murder has served as a high-profile case, and has highlighted the problem of impunity in Russia. However, hers is only one of many cases; since 1992, there have been 56 reported murders of journalists in Russia, with many more unconfirmed.

This conviction marks an important step towards justice in Politkovskaya’s case, but activists and journalists still have unanswered questions about who ordered her murder, and how they have not yet been caught.

CPJ reported that in 2010, the Russian government pledged to pursue 19 cases of murdered journalists, including Politkovskaya’s. While small steps have been made, Russia remains one of theworld’s most dangerous countries when it comes to freedom of expression and the press.

Although this conviction marks progress in challenging Russia’s culture of impunity, the systemic problems journalists face remain. As emphasized in The Guardian, this trial cannot truly be laid to rest until those who ordered the contract killing are identified and convicted.

With a number of significant updates in the ongoing search for justice in Politkovskaya’s murder case, we have created an interactive timeline to help track the main events from her murder in 2006 through to the present. We will continue to monitor and update the timeline accordingly, as events continue to unfold.

As justice for the many missing and murdered Russian journalists is sought, Politkovskaya’s case will continue to serve as an important example of why we cannot take press freedom for granted.

Stephanie Schoenhoff is CJFE’s Research and Communications Assistant, currently completing her degree in Media and the Public Interest at Western University.