Understanding the crisis in Bangladesh 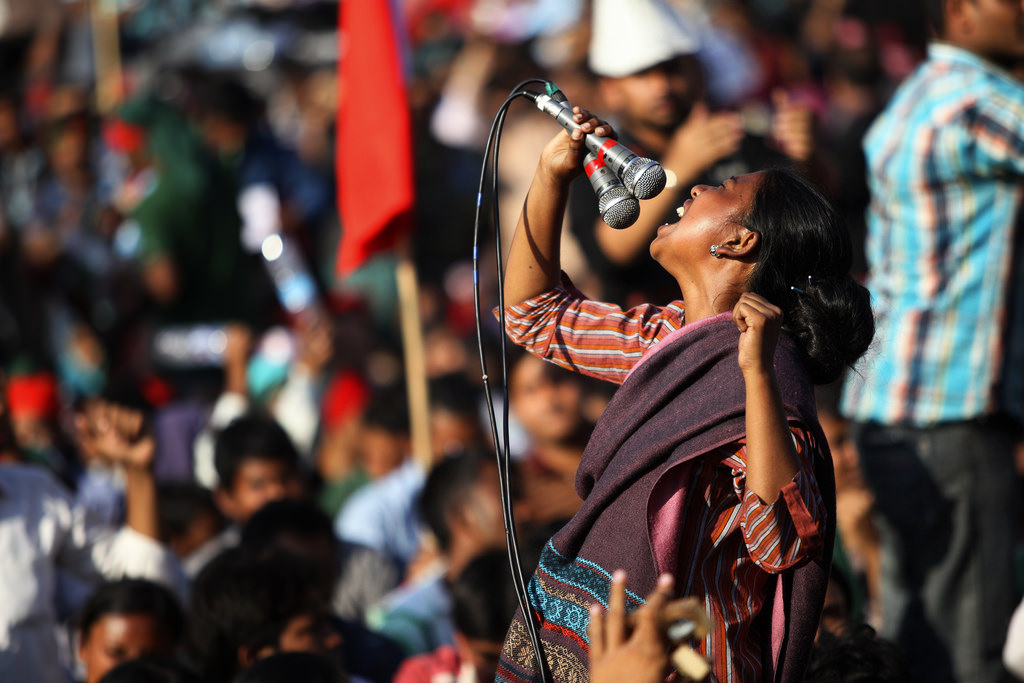 On June 7, Canadian Journalists for Free Expression (CJFE) hosted a free public panel at Ryerson University about the attacks against Bangladeshi free-thinkers. The panelists shed light on the political, religious and technological factors underlying the violence in Bangladesh. Speaking on the panel were Raihan Abir, a Bangladeshi blogger who found asylum in Canada; Brendan De Caires, Programs and Communications Coordinator at PEN Canada; and Wil McDowall, Vice Chair of Centre for Inquiry Canada. CJFE Executive Director Tom Henheffer moderated the discussion.

Here are some of the most thought provoking and memorable moments from the lively panel:

“It’s no longer just columnists and newspaper writers who are reaching a wide audience and subsequently being targeted. Now it’s bloggers and ordinary citizens. The fact that these writers can so easily reach the diaspora and foreign populations extends their influence.” – Brendan de Caires

The common profile of the dissident is changing from the male, middle-aged public intellectual with built-up political and cultural capital to younger male and female activists who are ordinary citizens and amateur writers. And no doubt part of what we're experiencing is that the public sphere has shifted online.

“With digital communication, the afterlife is potentially infinite. This means you can't really kill the messenger.” – Wil McDowall

There is hope in the impossibility of erasing someone’s voice from the Internet. As long as people are talking about the work of free-thinkers who have been killed, their ideas will continue to spread. As McDowall notes, blogger and activist Avijit Roy’s final words were “the virus of faith is dangerously real.”

“That's not the sentence you want your victim to die on. That message is now amplified a million fold.” – Wil McDowall

However, it is important to remember that technology will not set us free. People set people free, and the bloggers in Bangladesh are on the front lines of this movement. Events in Azerbaijan, Egypt, Bahrain, Yemen, and beyond have shown that traditional mechanisms for enforcing state power, such as the capacity to jail dissidents, are as strong as ever. One of the dangerous fallacies of modern digital communications is that because they’re ethereal, we disconnect them from their real world impact.

“When Avijit Roy was struck down, it was a theatre of murder. It was all about creating fear.” – Brendan de Caires

This is a very deliberate tactic, as described in a New York Times article on how radicalized Bangladeshi Islamists are trained not just to hack someone to death with a machete, but to keep the crowd at bay with a pistol afterwards. The Bangladesh government has not only failed to protect free-thinkers and bring the perpetrators of these brutal attacks to justice, they have also gone so far as to blame the victims and imply that their deaths may be justified because of their ‘objectionable’ writings. Despite this, Abir wholly rejects the notion that these attacks will succeed in silencing free-thinkers in Bangladesh.

“Our Prime Minister doesn't have the courage to stand beside us, but we continue to stand up for our rights.” – Raihan Abir

Abir wrote a book on atheism in 2011 with Avijit Roy, who was murdered in February 2015 for his outspoken ideas about free thought. Roy’s murder was followed soon after by the murder of his editor, then two of his publishers. Abir was able to avoid this fate by coming to Canada with the help of a variety of organizations, including Centre for Inquiry Canada, PEN Canada and CJFE’s Journalists in Distress program. Today, he continues his work as writer and editor for English-Bangla blog Mukto-Mona.com, where hundreds of thousands of free-thinkers, secularists and atheists gather online to write, debate and socialize.

“My country didn't care about me, but Canada—a country thousands of miles away—cared enough to give me safe haven." – Raihan Abir

Abir advised those who want to help to call their local constituency and tell them you want something done. McDowall agreed, saying that citizens must show the Canadian government that they care about this issue and that they must step up to help Bangladeshi free-thinkers. The best way to do this is the old fashioned one: write a letter to your MP.

De Caires was less sanguine about the potential of political pressure making a difference: “Let me pour a bit of cold water on this: what makes a difference here is money.” For example, despite the massive global advocacy campaign for jailed Saudi writer Raif Badawi over the past two years, Canada’s relationship with Saudi Arabia hasn’t visibly shifted.

“No government is going to trade the lives of a few problematic bloggers in Bangladesh or wherever for a multi-billion dollar arms deal.” – Brendan de Caires

One potential avenue for advocacy and intervention in Bangladesh is Canada’s ties to its garment industry. It is possible to put pressure on the Canadian government by refusing to buy clothes from a country that does not protect the lives of its citizens.

“The international community must increase pressure on states that violate human rights. One way is to impose trade sanctions.” – Brendan de Caires

The crisis in Bangladesh is ongoing. On July 2, heavily armed militants attacked a bakery in Dhaka, taking 35 people hostage. Hours later, when the standoff ended as Bangladeshi forces took the building, 20 hostages were killed, as were six of the attackers. ISIS took responsibility for the attack, which follows a series of brutal murders targeting secular bloggers and other free-thinkers, perpetrated by individuals affiliated with terrorist groups such as Ansarullah Bangla Team, Ansar-al Islam (the Bangladesh branch of Al Qaeda in the Indian Subcontinent) and Daesh (ISIS).

“The horror of this is sometimes too much,” the panelists agreed. But equally clear is that the horror unfolding will not overcome or silence free-thinkers in Bangladesh. 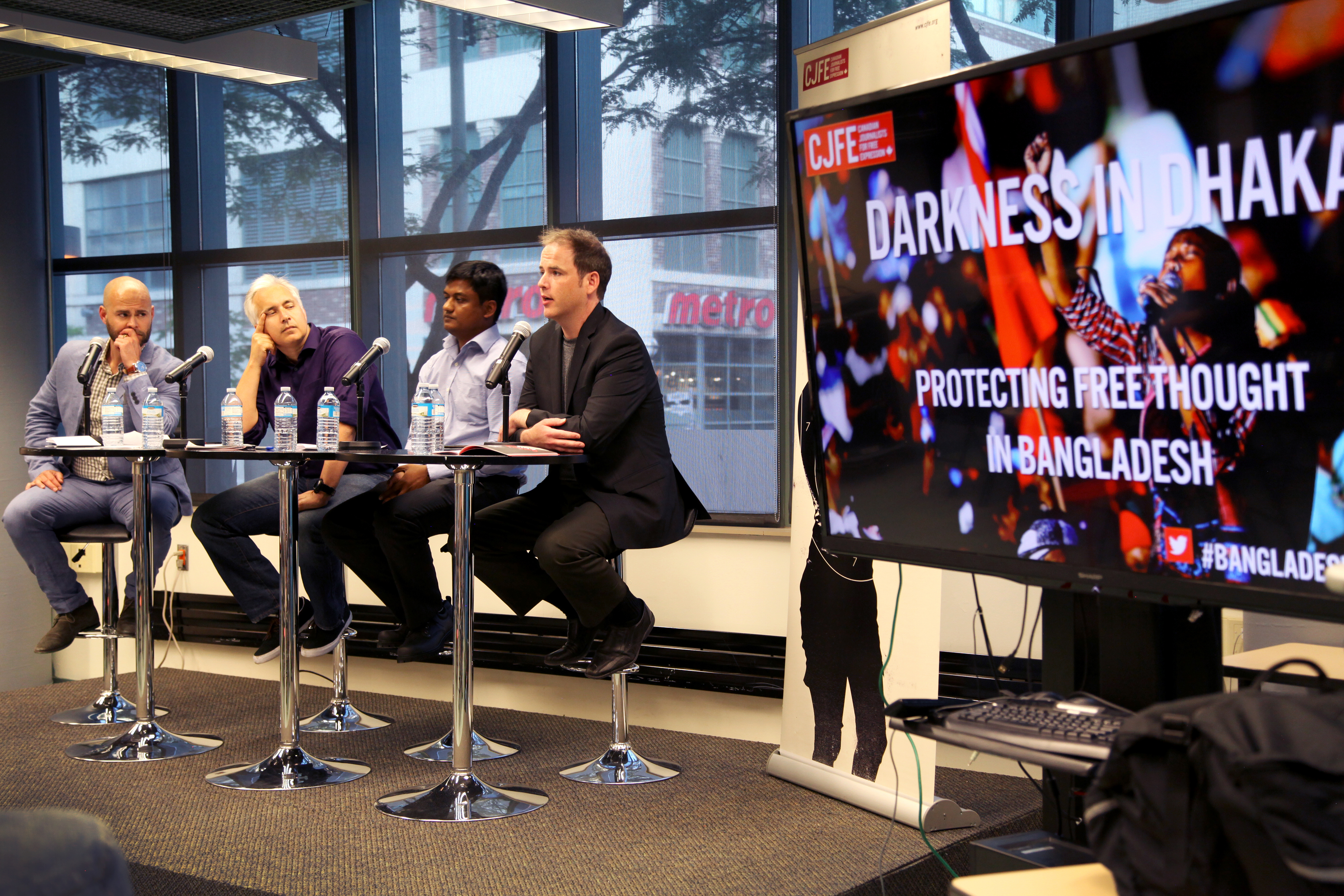 Click here to read the entire summary of the lively panel.