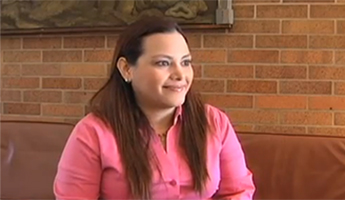 By Kate McCullough CJFE interviewed fellow Mary Triny Mena to learn more about her experiences as the Scotiabank/CJFE Journalism Fellow, and how the fellowship at Massey College is enriching her career as a journalist. As the 2012-2013 Journalism Fellow, Mary lives at the college and studies alongside four other journalism fellows from both Canada and other parts of the world. Canada's cold, snowy weather and a different language are just a few of the things Venezuelan journalist Mary Triny Mena has been getting used to since she arrived in Toronto in November. In Caracas, Venezuela, Mary Triny is an investigative reporter at Globovision, the only 24-hour TV station in the country and, more importantly, one of the few media outlets that remains independent from the government. Mary Triny's said the eight months she is spending in Canada studying at the University of Toronto gives the chance to "recharge your batteries." She has focused her studies around media law, a subject she says is especially important for journalists in Venezuela. She said a break from the stress of Venezuela's political climate and high crime rate is what she needed to give new perspective and meaning to her work as a journalist.

With files from Globovision TV Kate McCullough is an intern at CJFE through a partnership with Humber College, where she is the Executive Editor at Convergence Magazine.