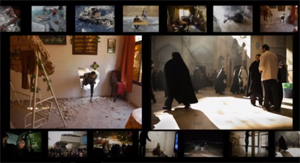 Here are all of the videos from our 2012 CJFE Gala: A Night to Honour Courageous Reporting. Please take the time to view them all and share them with others.

Iran and Syria are countries that dominate headlines—and both are largely closed off from the outside world by governments that fight to manage the message. The 2012 CJFE Photo Exhibit takes you onto the streets of Aleppo, Syria, and Tehran, Iran, through the eyes of two acclaimed photojournalists: Serbian photographer Goran Tomasevic and Iranian-born Canadian photographer Kiana Hayeri. Reuters’ Tomasevic forces us to confront the reality of those dying in Syria, as the world remains paralyzed. Hayeri gives us a snapshot of daily life for young women in Iran, a portrait that is a jarring contrast to what is often portrayed as a caricature of a country.

CJFE is grateful for the 2012 CJFE Photo Exhibit sponsorship of Henry’s and the Toronto Star.

Read the transcript of Nouri's speech.

Read the transcript of Mae's speech.

Read the transcript of Dan's speech.