Violence, threats and insecurity: The challenges of reporting in Afghanistan 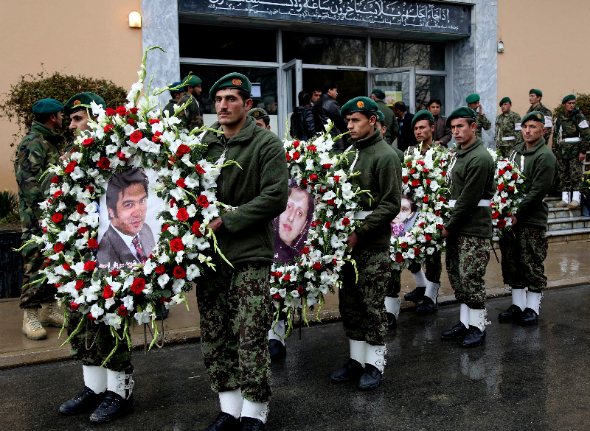 Afghan honour guards carry wreaths with photographs of Agence France-Press journalist Sardar Ahmad, his wife Humaira and their children Nilofar and Omar during their funeral ceremony in Kabul, Afghanistan. Sardar and his family were killed when four gunmen attacked the Serena hotel in Kabul during New Year's celebrations on March 20, 2014. PHOTO: AP/Rahmat Gul.

Violence against journalists in Afghanistan has been steadily increasing in 2014 with the withdrawal of foreign troops and a decrease in international aid. Five journalists were killed in the first four months of 2014. As control over Afghanistan’s national security transfers from international to Afghan forces and peace talks continue with the Taliban, there has been some uncertainty as to what will happen to the media and free expression in the country, especially as it underwent presidential elections.

CJFE’s 2014 Tara Singh Hayer Award winner Kathy Gannon was one journalist caught in the crossfire. She and her longtime friend and work partner, photographer Anja Niedringhaus, were covering the run-up to the elections in April 2014 when an Afghan police officer suddenly opened fire into the back of their vehicle. Niedringhaus was killed instantly, while Gannon was severely injured.

The latest upsurge in violence against journalists follows a short period of opening and development in the media. Pre-9/11 Afghanistan under Taliban rule had restricted access to independent media, both local and international. There was one Taliban-controlled radio station, used for state announcements and religious proclamations. Things began to change after the US invasion of Afghanistan that saw control lifted from the Taliban and transferred to an ostensibly more democratic system. In 2014, there are “175 FM radio stations, 75 TV channels, four news agencies, and hundreds of publications, including seven daily newspapers, Internet cafés in major cities and mobile phones in the hands of about half the population of 29 million people.”

While Afghan journalists have made great strides in establishing media outlets and providing Afghans with comprehensive coverage of local and national events in recent years, there are still many challenges being faced by local and foreign journalists alike, namely, harassment, threats and lack of support from government authorities.

Afghanistan currently ranks sixth on the Committee to Protect Journalists’ (CPJ) Global Impunity Index. According to CPJ, fatalities are higher among foreign journalists than local journalists. Many Afghan journalists have been specifically targeted, kidnapped or intimidated by the Taliban, local warlords and on occasion by Afghan government or security officials. The situation is particularly bad if they are associated with Western media, which is being increasingly smeared by the Taliban and similar armed groups. Nai, a non-profit organization supporting open media in Afghanistan, reports 52 incidents of violence against journalists so far this year.

British-Swedish journalist Nils Horner was killed in March 2014, targeted while reporting on a suicide bombing that had occurred earlier in the year in Kabul. A Taliban-splinter group claimed responsibility for the attack, stating that Horner was not a journalist but a spy working for MI6. However, there is no concrete evidence that this group actually carried out the murder. Cilla Benkö, the director general of Horner’s employer Swedish Radio, said that Afghan authorities have not been very active in seeking the actual perpetrators of this crime, likely because Horner was a foreign correspondent.

Journalists not only face threats and attacks from terrorists but also intransigence from government officialswho are uncooperative and withhold access to information. Authorities have been known to make threats in order to deter journalists from pursuing a story. The situation is even worse for women who are still largely underrepresented in the Afghan media.

According to a female journalist who heads a radio station in Balkh province, being a female journalist is particularly challenging. They face sexual harassment and threats from officials, strangers and sometimes even family members. Cultural constraints on women in Afghanistan often restrict them to work inside the office, instead of venturing out to do field work. In many places in Afghanistan, the idea of women undertaking public roles and working is considered taboo. Additionally, there is pressure on women working in the media from family elders to quit their jobs in order to avoid wider repercussions for the entire family, or because they view the career as unseemly. Lack of training and resources for women in the media is also a serious issue.

In September 2014, Palwasha Tokhi Meranzai, a female Afghan journalist, was killed inside her home by an unknown assailant. She had received a death threat relating to her reporting about a month before her murder; despite evidence that the motive was tied to her profession, Afghan security services persist in treating it as a robbery.

Since early 2013, press freedom organizations have noted a decrease in the number of women currently working as journalists in Afghanistan due to the culture of fear created by religious militants such as the Taliban and related organizations. Shaffiqa Habibi, director of the Afghan Women Journalist Union, told CPJ in 2013 that she estimated that 300 of the 2,300 professional female journalists had stopped working out of fear for their personal safety.

While there is a great deal of uncertainty about the future of a free press in Afghanistan and the safety of journalists working in the country, many are taking steps to ensure they will be safe in their work. In August, 20 female journalists in the northern province of Jawjzan formed the first union of female journalists in Afghanistan. The union aims to promote women’s rights in the region and provide training and support specifically geared to women in the field. Similar unions have been established in other provinces across the country.

There is also evidence that the current Afghan government might be softening towards journalists; a New York Times correspondent, expelled from Afghanistan earlier in 2014 over a story he wrote on the presidential elections, was recently allowed to re-enter the country. Matthew Rosenberg was told to leave Afghanistan by the administration of former President Hamid Karzai after he penned an article stating that a group of government officials had formed an interim government in the hopes of seizing power during the election’s stalemate.

On October 5, Mohammad Daoud Sultanzai, an adviser to newly elected Afghan President Ashraf Ghani Ahmadzai, said in a statement that if a journalist has a credible source for a story, they should be allowed to write it, as per the law. Although there has been a spike in violence over the last year towards journalists working in Afghanistan, there remains cause for optimism that the country can continue to develop a strong independent press. If the current government continues its commitment to protecting the rights of journalists and freedom of the media, Afghans may be able to avoid returning to the oppression and censorship they experienced under Taliban rule.

Alexandra Theodorakidis is a former CJFE intern and current freelance journalist based in Toronto. Follow her on Twitter @AlexandraTheo.