Whistleblowers Save Lives. So Why Does Canada Punish Them? 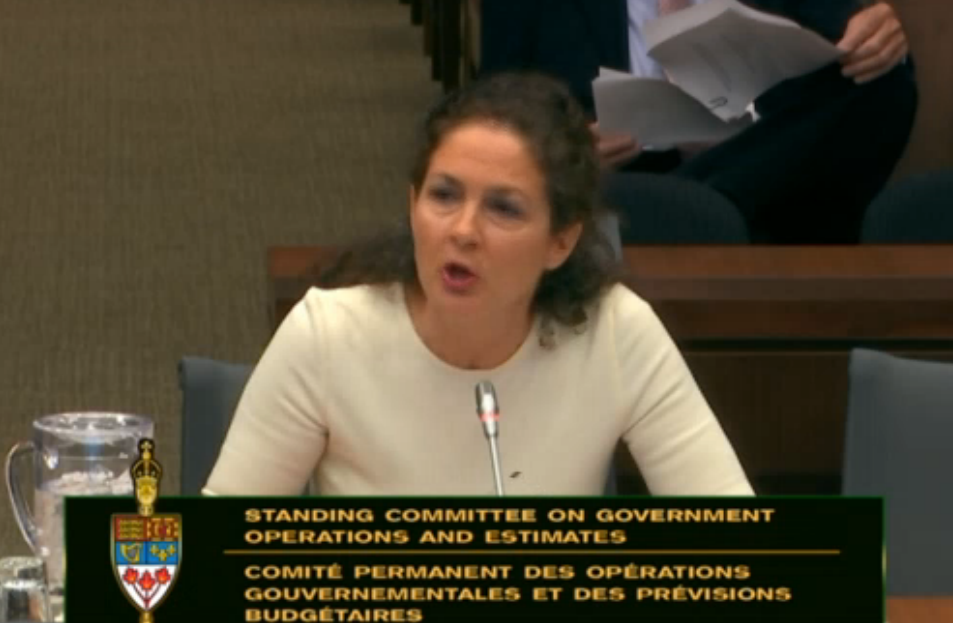 Joanna Gualiteri testifying at the Committee on Government Operations and Estimates review of the Public Servants Disclosure Protection Act.

From a young age, Joanna Gualtieri had a strong sense of morality. She and her three siblings were raised by parents active in social justice and civil rights movements and a father who ministered in the United Church of Canada. Gualtieri credits this upbringing with giving her the courage to become a whistleblower, and helping her through a 13-year legal battle with the government of Canada.

Gualtieri’s legal proceedings began after she blew the whistle on the Department of Foreign Affairs, where she worked in the realty management bureau. Gualtieri exposed billions of dollars of overspending on luxury living during overseas Canadian diplomatic missions. In just one instance, Gualtieri found that a Canadian trade official was spending $350,000 a year of taxpayer money renting a flat in Tokyo, while an $18-million mansion owned by the Canadian government sat empty in the same city for nearly four years. Over the years, Gualtieri continued to present reports of wasteful spending to her employer, doing what she had been hired to do. But instead of being congratulated, Gualtieri was censored and her trips to inspect foreign embassies stopped. Gualtieri was ostracized and intimidated by her department until she took an unpaid sick leave. After six years suffering reprisals for speaking the truth, her leave became permanent and she left her job with Foreign Affairs.

In 2006, the Harper government created the $40-million Public Servants Disclosure Protection Act, bringing along with it the creation of the Public Sector Integrity Commissioner. The PSDPA, meant to symbolize Canada’s step towards greater whistleblower protections, ended up making things worse. Today, whistleblowers in Canada are actually less protected then they were a decade ago. A public sector employee looking to address wrongdoing under the PSDPA must first report it to the commissioner, who acts as the gatekeeper for the tribunal. The tribunal is the only body able to provide remedies to whistleblowers. But before you reach tribunal, the commissioner begins an initial investigation that can take up to two years.

While the Act claims to protect anonymity, the whistleblower’s identity is frequently revealed as the information they expose is usually only known by certain employees. Whistleblowers commonly experience retaliation for speaking out against wrongdoing, and the law provides no assistance or protection. “A very significant number of people that stand up to point out wrongdoing suffer consequences,” says investigator Sandy Boucher, during a panel on whistleblower protections hosted by Ryerson University’s Centre for Free Expression. “Management is often more interested in trying to find out who the whistleblower is than in trying to solve the problem.” Once a whistleblower’s identity has been exposed, they can experience loss of employment and wages, demotion, ostracism, or blacklisting in their field. If the commissioner’s investigation finds that the reprisals taken against the whistleblowers were retaliation for their disclosure, the case then goes to the tribunal. But the onus of proof is on the whistleblower, who pays out of pocket for legal expenses, while those accused of reprisals are covered by taxpayers.

The tribunal process is set up to protect whistleblowers from experiencing retaliation, but the process is so ineffective that not a single case has ever successfully made it through tribunal to receive a remedy. According to James Turk, the director of the CFE, most people don’t report cases of wrongdoing because of poor treatment and lack of protection for whistleblowers. “Federally we have legislation, but it’s bad legislation and it isn’t implemented well. Your only other option is to go public and have the force of public pressure fix the problem, but those who do that are usually fired or black-balled in their profession.”

In 1998, Gualtieri filed a harassment lawsuit against the Department of Foreign Affairs. Her legal battle stretched over a decade, burdening her with endless legal bills and the stress of relentless interrogations. The process took a toll on Gualtieri’s physical and mental health. “My experience was a prolonged period of hell from 1992 when I started at the department to when I finally freed myself from the last legal issue in 2012,” says Gualtieri. “For me, that entire period was like being in a jail cell.”

“The strategy for the defendants in these cases is to just delay, delay, delay, and run up the other person’s costs,” says David Hutton, the former executive director of Federal Accountability Initiative for Reform, an organization that was founded by Gualtieri in ’98 and dedicated to whistleblower advocacy. “You cause them more psychological distress and basically wear them out.”

Gualtieri was pitted against a justice department legal team that outweighed hers by eight-to-one. And according to an analysis on the PSDPA done by FAIR, the justice department’s legal files on Gualtieri’s case totalled more than 50 linear feet of paperwork—the height of a five-storey building. During those 20 years Gualtieri suffered from depression and never slept through the night. Gualtieri focused all of her time and energy on her case. Both Gualtieri’s brother and mother passed away before her legal battle finally came to an end in 2012. Gualtieri won her suit and an undisclosed amount of money, but at a steep cost. Gualtieri sacrificed 20 years of her life, her health, mental well-being, and time with her mother and brother before their passing. And for most Canadian whistleblowers a successful outcome is far from the norm. “It’s come to the point where in Canada, you have to be a sacrificial lamb in order to bring awareness to issues of public importance,” says Gualtieri. “If I ruined my life to blow the whistle, was it worth it?”

In 2003, amidst Gualtieri’s battle with the federal government, the then-Liberal government removed Section 236 of the Public Service Modernization Act, stripping public servants of their right to sue their bosses and ensuring that another lawsuit like Gualtieri’s isn’t brought against the government in the future. According to Hutton, Canada’s whistleblower protections act is both poorly written and terribly administered, resulting in virtually no protections for whistleblowers in Canada. “Canada is known around the world as the Titanic of whistleblower legislation,” laughs Hutton. “We have the system that has most publicly and badly failed.” The review of the PSDPA, although five years late, is now underway and whistleblower advocates from all over the world have testified, including Boucher, Gualtieri and Hutton. “The door is cracked open,” says Hutton, “But there’s a long way to go.” Hutton says that even if the committee can cut through the complexity of the law and write a strong report, it’s still up to the government to implement it, and right now it doesn’t look hopeful.

Gualtieri is also pessimistic. “It’s a pretty hopeless landscape. The current law is more of a regime to control and reign in the whistleblower rather than empower and encourage people to come forward and do the right thing.” The review is a step in the right direction, but only time will tell whether any real reform will come from it. Considering the grief Gualtieri has been put through, this skepticism is justified. Today, she is still bound by a gag order that was packaged with her FA settlement. While speaking to the parliamentary committee reviewing the PSDPA, Gualtieri quoted articles written about herself when referencing her case, in fear of testing the limits of her gag order. “Whistleblowers save lives,” Gualtieri said to the committee. “Whistleblowers protect our national security.”

When I asked Gualtieri if she would blow the whistle all over again, she answered no. “I would absolutely not do this again, it was just too ruinous.”

Violet Rusu is a student at Ryerson University’s School of Journalism, minoring in Politics and Governance. With a passion for human rights, Violet is an activist and campaigner for freedom of expression, press freedoms, whistleblower protection, and minority rights.