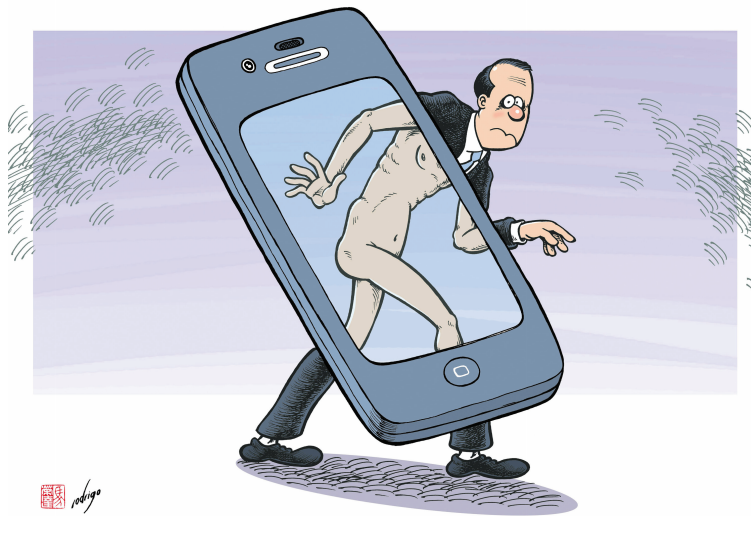 This year’s revelations that the federal electronic surveillance unit, Communications Security Establishment Canada (CSEC), had conducted domestic spying operations on the Canadian public was largely met with apathy and calm, according to media critic Jesse Brown. Contrast this with the uproar and anxiety Americans demonstrated when news about the NSA’s surveillance activities broke. Why don’t Canadians care about surveillance? Brown takes an in-depth look at this question in his article for CJFE’s fifth annual Review of Free Expression in Canada. As he considers whom to hold responsible for public indifference towards domestic security issues, his critical take on Canadian media coverage of digital surveillance leaves us with a sobering reminder: “remember who writes our headlines.”

WHEN AMERICANS found out that their government had been spying on them—all of them, all of the time—they got understandably upset. An uproar over the NSA’s bulk surveillance programs raged, and rages still, despite reforms promised by Barack Obama.Yet when we found out that spying is occurring here in Canada, public response was apathetic and the media may have something to do with it.

We now know that our own electronic surveillance unit, Communications Security Establishment Canada (CSEC), has been:

■ collecting, in bulk, detailed information about our phone calls that identifies where we are and whom we speak to

■ spying on our trade partners in Brazil

■ along with CSIS and the Justice Department, deliberately misleading the courts in order to obtain surveillance warrants.

The public reaction to such revelations, we are told by The Globe and Mail’s Elizabeth Renzetti, has been rolling over and going to sleep. Security news like this is greeted with yawns in Canada, she writes, while in the rest of the world it merits front-page headlines. I don’t argue her point. But let’s remember who writes our headlines.

The Canadian public cannot be blamed for how its press underreports and downplays the news that they live in a surveillance state. There is not a single journalist working for a Canadian news outlet who is assigned full-time to domestic security issues. Meanwhile, our broadcast media, jumping on the surveillance scandal from time to time and without a deep understanding of its context and complexities, has provided an open forum for ex-spooks calling themselves security experts, who bully terrorism-fearing Canadians with “nothing to hide” into acceptance. Intelligence agency talking points that say spying is no big deal are echoed in editorials from some of our top pundits. These are particularly egregious examples, but more typically, Canadian reporting on CSIS and CSEC is bloodless and technical, drowning the reader in an alphabet soup of confusing acronyms and dull jargon.

This serves the agenda of our watchers. CSEC has evaded accountability through semantic games, misleading sophistry and outright lies. Its default response to any question is to cite the law that forbids it from targeting Canadians, knowing that it has welcomed its American counterparts to do so in its place, and knowing that it often spies on Canadians “incidentally” when its supposed targets are foreigners. It also interprets “collecting metadata” as a free pass for indiscriminate bulk surveillance: if it’s spying on large groups of Canadians, then clearly no one Canadian has been “targeted,” right? We can’t know for sure, because CSEC won’t say just how it defines “targeting.” CSEC claims that it’s authorized to collect metadata because the collection of metadata is not explicitly prohibited in the National Defense Act, which was written before the term “metadata” existed.

"Our broadcast media has provided an open forum for ex-spooks calling themselves security experts, who bully terrorism-fearing Canadians with “nothing to hide” into acceptance."

Defending CSEC, Stephen Rigby, Prime Minister Stephen Harper’s national security adviser, dismissed metadata as simply “data about data,” while Defense Minister Rob Nicholson assured Parliament that no Canadians have been “tracked” by CSEC in airports. But some of the data that the metadata is about is location data, which of course can easily be used to track individuals. When all else fails, both Rigby and the head of CSEC, John Forster, have pointed to the independent commissioner who is tasked with assuring CSEC’s legality. But both Rigby and Forster neglect to mention that in his last report to Parliament, outgoing CSEC commissioner Robert Décary explicitly withheld this very assurance, writing that while there was reason to believe CSEC’s actions may have been illegally directed at Canadians, he couldn’t reach a definitive conclusion, because key CSEC records (provided by CSEC) were “unclear or incomplete.”

Of course, we still don’t know the full extent of CSEC’s domestic surveillance activities. But our media’s response to not knowing has been to say as little as possible, to hedge bets and to underserve this story. We are quite comfortable writing think pieces about our national psyche, contrasting Canadian apathy with American worship of personal liberty. We are less adept at applying unyielding pressure on power by purposefully stoking public outrage.

The media must make the case that unchecked, secret mass surveillance is wholly incompatible with freedom in general and free expression in particular. The press cannot be considered truly independent or free, cannot truly hold power to account, with the spectre of the all-seeing eye of the state hovering above it. For those who feel they have nothing to hide, the difference between secrecy and privacy, to paraphrase author Cory Doctorow, always proves useful: When I use the bathroom, I don’t do anything I consider a secret, but that doesn’t mean I’m okay with you watching me in that private moment. If people don’t understand this, we need to explain it.

"The press cannot be considered truly independent or free, cannot truly hold power to account, with the spectre of the all-seeing eye of the state hovering above it."

To be clear: I’m not talking about “starting a public conversation” or other such weak tea. I’m saying it’s our duty as journalists to intentionally stoke outrage, to insist that our readers and viewers and listeners give a damn and demand answers from the people who are spying on them. In this, at least, the press can be shamelessly partisan. We are explicitly pro-information and pro-answers, just as CSEC is explicitly pro-secrecy. Our mission is clear: if the public is asleep, it is our job to wake them. If Canadians are asking “Why should we care?” then it is our job as journalists to provide answers.

Jesse Brown is a media critic at canadalandshow.com. He created and hosted two CBC Radio programs: The Contrarians and Search Engine.

Free Expression: Canada Review of Free Expression in Canada Digital Issues type-feature Surveillance type-blog_entry
Do you like this page?
Tweet